Rare, Treatable: Why Past Reports of Blood Clots After AstraZeneca Vaccine Should Not Worry You 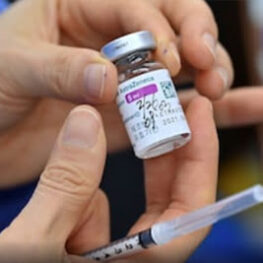 With Covid-19 community transmission on the rise once again, those aged over 50 are weighing up the benefits of being vaccinated against the virus with the very rare risk of blood clotting induced by the AstraZeneca vaccine. A report by Baker Heart and Diabetes Institute and James McFadyen, Baker Heart

With Covid-19 community transmission on the rise once again, those aged over 50 are weighing up the benefits of being vaccinated against the virus with the very rare risk of blood clotting induced by the AstraZeneca vaccine.

A report by Baker Heart and Diabetes Institute and James McFadyen, Baker Heart and Diabetes Institute Melbourne published in The Conversation says, since the first reports of blood clotting after the AstraZeneca vaccine emerged in March 2021, our understanding of the clotting disorder, called vaccine-induced thrombotic thrombocytopaenia (VITT) or thrombosis with thrombocytopenia syndrome (TTS), has grown. We now know how to diagnose and treat it, so we’re likely to see better outcomes for patients with the condition.

How common and deadly is it?

These figures are similar to those reported in the UK, Europe, the Middle East and Canada. Although early reports from Europe indicated approximately 20 per cent of cases of TTS were fatal, in Australia, to date, one out of 24 TTS cases has been fatal, so just over 4 per cent.

What exactly is thrombosis with thrombocytopenia syndrome?

Although we don’t yet have the full explanation, it appears that the AstraZeneca vaccine can activate platelets, which are small cells in our blood important for forming blood clots that prevent bleeding. In some people, activated platelets can release a protein called platelet factor 4 (PF4), which binds to the AstraZeneca vaccine. It is thought that this binding of PF4 can induce the immune system to activate more platelets, making them stick together and thereby diminishing their numbers. This leads to blood clotting (thrombosis) and a low platelet count (thrombocytopaenia).

Having blood clots with a reduced number of platelets is a key feature of TTS. Different to other blood clots This mechanism is quite different to the usual process by which blood clots occur.

TTS appears to result from an irregular immune response, so current evidence suggests people with a history of heart attack, stroke, deep vein thrombosis, pulmonary embolism (a clot in the lung) or on regular blood thinners aren’t at any increased risk of TTS. However, as a precautionary measure, the Pfizer vaccine is currently recommended for people aged under 50 years, or those with a history of clots in the brain, in the abdomen or previous low platelet count after taking the blood-thinning drug heparin. Testing and treatment has improved A key development is diagnostic tests and guidelines to recognise and treat cases of TTS. In most cases, patients will have a low platelet count, evidence of a blood clot, and antibodies directed against PF4. Many of these tests can be done quickly.

Treatment can now begin immediately, with specific blood thinners and medications to dampen the immune system. As of May 20 when the latest vaccine safety report was released, 21 of the 24 Australians with TTS had recovered and been discharged from hospital and two were stable and recovering in hospital.

So what side effects are normal, and what might indicate a clot?

General side effects are common after any vaccine. In the case of the AstraZeneca vaccine, these occur in the first two days after vaccination and include: headache fever (chills) muscle and joint aches nausea fatigue pain at the site of injection, which tends to resolve with simple measures such as paracetamol. In many cases, the blood clots in TTS occur in unusual locations such as the veins in the abdomen (splanchnic vein thrombosis) and brain (cerebral venous sinus thrombosis). They typically occur four to 30 days days after vaccination. Therefore, symptoms that could indicate TTS after getting the AstraZeneca vaccine include: persistent or severe headache blurred or double vision shortness of breath severe abdominal, back or chest pain swelling, redness, pain in a leg unusual bleeding or bruising. If you experience any of these symptoms four to 30 days after your vaccination, seek urgent medical attention. Balancing the risk and benefits While TTS is very rare, some people will have concerns and will want to discuss them with their doctor. This is essential to allow people to make an informed choice.

However, with the ongoing risk of COVID outbreaks in Australia and their potential deadly consequences, as well as the potentially severe long-term effects of COVID-19, for the vast majority of people, the benefits of vaccination against COVID-19 as soon as possible outweigh the risks.