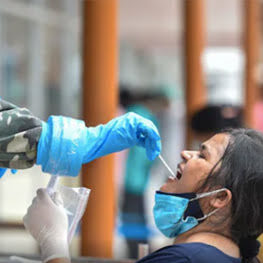 The rural spread of the Sars-Cov-2 virus, which causes Covid-19, has forced the government to change its testing strategy and make a U-turn on its insistence on the “gold standard” RT-PCR tests in order to control the deadly infection. By the end of June, nearly 60% of all tests done

The rural spread of the Sars-Cov-2 virus, which causes Covid-19, has forced the government to change its testing strategy and make a U-turn on its insistence on the “gold standard” RT-PCR tests in order to control the deadly infection. By the end of June, nearly 60% of all tests done would be Rapid Antigen Tests (RATs).

In the recent past — like on April 8 — Prime Minister Narendra Modi has impressed upon Chief Ministers that at least 70% of the tests conducted in the country should be RT-PCR (reverse transcription polymerase chain reaction) tests, which are considered more reliable. As of May 14, out of India’s capacity to conduct about 19 lakh daily tests, 12 lakh were being done through RT-PCR. This translated to over 60% of the total tests, while the numbers of rapid tests were at 7 lakh.

But the government is now changing this strategy with a focus on ramping up its testing capacity during the second wave. Indian Council of Medical Research (ICMR) chief Balram Bhargava said on Thursday India would carry out 45 lakh tests a day by the end of June; RATs would account for 27 lakh tests (60%) and RT-PCR for 18 lakh (40%). The change in the strategy will start reflecting by the end of this month with the daily capacity being increased to 25 lakh tests; at 12 lakh, RATs will account for nearly half the tests.

In the past, the government did not depend much on RATs (given their low reliability) and has, in fact, insisted on an RT-PCR test if a symptomatic person tested negative in a rapid test.

The spread of the coronavirus to rural areas, where RT-PCR testing labs are not available, is the main reason prompting this strategy change. The feedback from states is that they have started doing RT-PCR tests through mobile vans in rural areas, but reports take two-three days to come. This is because samples have to be taken to RT-PCR labs situated in bigger towns. However, rapid tests can be done in rural areas by a door-to-door exercise. They throw up results in an instant, thereby helping quick start of the treatment.

RATs, hence, are expected to become the main testing mechanism in rural areas. The government has also approved home-testing RAT kits of multiple companies that are soon to hit pharmacy stores and cost just Rs 250. This move is expected to significantly ramp up RAT testing numbers in urban areas from June. Four crore kits from Mylab Discovery solutions could be available next month.

Uttar Pradesh has increased its testing capacity in a big way this month through RAT and is now conducting the highest number of tests in the country, at nearly 2.91 lakh tests daily. The positivity rate in India’s most populous state has been falling sharply in May. Daily cases reported from the state have dropped from a high of about 38,000 on April 24 to just 6,725 cases on May 20. In Bihar too, there has been high reliance on RATs. Here, the daily number of cases has almost halved from 13,900 on May 5 to 6,551 on May 20.