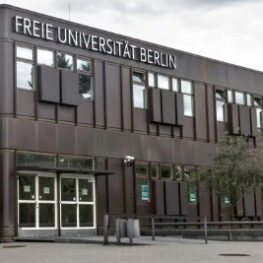 This year marks the fifteen-year anniversary of the Dahlem Humanities Center at Freie Universität Berlin. As part of the festivities, German studies scholars Paul Reitter (Ohio State University) and Chad Wellmon (University of Virginia) will be holding a guest lecture on the future of work in the humanities on November

This year marks the fifteen-year anniversary of the Dahlem Humanities Center at Freie Universität Berlin. As part of the festivities, German studies scholars Paul Reitter (Ohio State University) and Chad Wellmon (University of Virginia) will be holding a guest lecture on the future of work in the humanities on November 8, 2022. Admission is free of charge; those wishing to attend are requested to register by November 4.
The Dahlem Humanities Center (DHC) at Freie Universität was founded in 2007 as part of the German federal and state governments’ Excellence Initiative. It was the first institution of its kind in Germany. The aim was to provide humanities research at Freie Universität Berlin with a shared forum, as well as to make humanities research more visible to the general public. Initially founded as a temporary “Focus Area” at Freie Universität, the DHC was made a permanent institution in November 2019 due to its successful work as an institute within the university.
However, the celebratory event will focus less on the past fifteen years and more on the future of the humanities – with a view that is decidedly optimistic. After all, while it is often argued that the humanities are facing a “crisis,” this is an argument that is as old as the discipline itself, as Paul Reitter and Chad Wellmon discuss in their book Permanent Crisis (University of Chicago Press, 2021). The two researchers will speak at the event as part of the festivities. They argue that crises are no grounds for pessimism – rather, they present an opportunity. From this perspective, the two German studies scholars present a range of interesting trajectories for the humanities in the twenty-first century. Professor Günter Ziegler, president of Freie Universität, will open the event, followed by Professor Karin Gludovatz, director of the DHC, who will look back on fifteen years of success.
The DHC serves as an interdisciplinary platform for the unique range of humanities disciplines represented at Freie Universität, bringing together and networking these disciplines in one place. Scholars come together to work on topics from antiquity to modern day, dealing with regions and material cultures from around the world, languages and literature both ancient and modern, and engaging with history and philosophy. The DHC supports the development of new, interdisciplinary research initiatives through activities such as “Research in Dialogue,” as well as providing expertise to scholars wishing to submit research proposals. The DHC played an important role in helping secure funding for the Cluster of Excellence 2020 “Temporal Communities: Doing Literature in a Global Perspective.”
In addition to promoting connections within Freie Universität, the DHC also works closely together with international partner institutions in humanities fields. Currently, the center is focusing on developing working relationships with Sub-Saharan Africa. For example, a partnership was recently formed with the Center for Humanities Research at the University of the Western Cape in South Africa. Plans are being made to organize joint events and guest stays for researchers from both institutions.
The DHC is also particularly committed to supporting researchers in the early stages of their academic career. For example, the Dahlem Junior Host Program provides junior and senior researchers with the opportunity to establish international contacts through workshops and invitations extended to guest academics. At the same time, the DHC acts as a host institution for international scholars who come to Berlin after receiving grants from sponsors such as the Alexander von Humboldt Foundation.
The DHC also regularly organizes large public events that bring authors and humanities scholars of international renown to Dahlem. For example, every two years it hosts the Siegfried Unseld Lectures in collaboration with Suhrkamp publishers. Former speakers at these lectures include Joanna Bator, Andreas Meier, and Ann Cotten. The Hegel Lecture, an annual highlight in Freie Universität’s academic calendar, will be taking place in person once again in December 2022. Previous speakers at the event include Judith Butler, Homi Bhabha, Hélène Cixous, Armin Nassehi, and Seyla Benhabib. Art historian Victor I. Stoichiță (Université de Fribourg) will give this year’s Hegel Lecture on December 1, 2022.