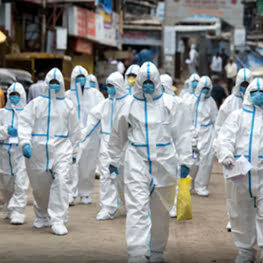 Revising its Covid-19 clinical management guidelines, the Union Health Ministry on Wednesday said that the virus spreads “predominantly through the airborne route and droplet released when the infected person coughs, sneezes or talks". The revision regarding the virus’s spread marks a change from its last year’s protocol that stated said that

Revising its Covid-19 clinical management guidelines, the Union Health Ministry on Wednesday said that the virus spreads “predominantly through the airborne route and droplet released when the infected person coughs, sneezes or talks”.

The revision regarding the virus’s spread marks a change from its last year’s protocol that stated said that the infection spreads through close contact.

“These droplets may also land on surfaces, where the virus has been seen to remain viable for a variable duration of time depending on the type of surface. Infection can also occur if a person touches an infected surface and then touches his or her eyes, nose, or mouth. (known as fomite transmission),” the Health Ministry’s National Clinical Management Protocol for Covid-19 stated.

A guideline recently issued by the office of the principal scientific adviser to the government has also mentioned that infected aerosols can be carried in the air up to 10 meters.

In its advisory ‘Stop the Transmission, Crush the Pandemic-Masks, Distance, Sanitation and Ventilation to prevent the spread of SARS-CoV-2 virus’, the Office of the Principal Scientific Advisor (PSA) noted that well-ventilated spaces play a crucial role in diluting the COVID-19 viral load of infected air and help in decreasing the risk of transmission from one infected person to the other.

Saliva and nasal discharge in the form of droplets and aerosols carry the virus from one person to another. Larger size droplets fall to the ground and on surfaces, and smaller aerosol particles are carried in the air to greater distances, the advisory said. In closed un-ventilated indoor spaces, droplets and aerosols become quickly concentrated and greatly increase the risk of transmission to people in the area, it said.

Droplets fall within 2 metres from an infected person and aerosols can be carried in the air up to 10 metres, it said. The earlier protocol was to maintain six feet (1.8 metres) distance to prevent the spread of the novel coronavirus infection.

The virus is evolving and so are we

With the virus spreading exponentially forcing states and towns to impose strict lcokdowns and curfews, the government and the health ministry have had to tweak and update their policies regarding the treatment and biology of the coronavirus.

On May 17, after various studies and expert panels suggested that plasma therapy on Covid-19 patients was found ineffective in reducing the progression to severe disease or death, the treatment protocol was dropped from the clinical management guidelines.

The decision was taken based on recommendations of experts from AIIMS, ICMR-Covid-19 National Task Force and Joint Monitoring Group of the  Ministry of Health & Family Welfare, and the Government of India.

The desperation for and scarcity of antiviral drugs Remdesivir and Ivermectin forced the health ministry to caution against their overuse.

Remdesivir is a broad-spectrum antiviral medication originally meant to treat Ebola. And Ivermectin is used to treat parasite infestations such as head lice, scabies, and river blindness.

“Safety and efficacy are important when using any drug for a new indication. WHO recommends against the use of Ivermectin for COVID-19 except within clinical trials,” tweeted Soumya Swaminathan, WHO chief scientist, recently.

Earlier this month, the revised guidelines issued by the All India Institute of Medical Sciences (AIIMS) on the use of Remdesivir and Ivermectin, recommended that Remdesivir may be considered under special circumstances only if the patient is in the moderate to severe category requiring oxygen support. The injection should be administered within 10 days of the positive test result. It added that the injection is not meant for home use or for someone who is not on oxygen support.