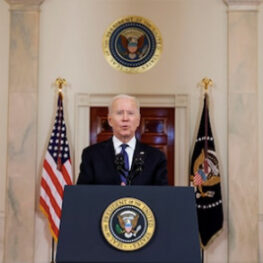 The Biden administration will issue a new executive order on Thursday that bans U.S. entities from buying or selling publicly traded securities for 59 Chinese companies with alleged ties to defense or surveillance technology sectors, senior administration officials said. The Treasury Department will enforce and update on a “rolling basis"

The Treasury Department will enforce and update on a “rolling basis” the new ban list, which replaces one from the Department of Defense, the officials said, noting the policy would take effect on Aug. 2.

The new order, which is an effort to make a similar Trump-era prohibition more legally sound, signals the administration’s intent to “ensure that U.S. persons are not financing the military industrial complex of the People’s Republic of China”, one of the senior officials told reporters.

The inclusion of Chinese surveillance technology firms expanded the scope of the previous order, the officials said.

­ President Joe Biden has been reviewing a number of aspects of U.S. policy towards China, and his administration had delayed the implementation of the previous order while it formulated its new policy framework.

The move is part of a broader series of steps to counter China, including reinforcing U.S. alliances and pursuing large domestic investments to bolster U.S. economic competitiveness, amid increasingly sour relations between the world’s two most powerful countries.

Biden’s Indo-Pacific policy coordinator Kurt Campbell said last month that a period of engagement with China had come to an end and that the dominant paradigm in bilateral ties going forward would be one of competition.

The Treasury Department is expected to issue the full list later on Thursday, and give guidance on what the scope of surveillance technology means, including whether companies are facilitating “repression or serious human rights abuses” in or outside of China, one of the officials said.

“We really want to make sure that any future prohibitions are on legally solid ground. So, our first listings really reflect that,” a second senior administration official said.

Investors would have time to “unwind” investments, a third official said.

In May, a judge signed an order removing the designation on Chinese mobile phone maker Xiaomi, which was among the more high-profile Chinese technology companies that the Trump administration targeted for alleged ties to China’s military.