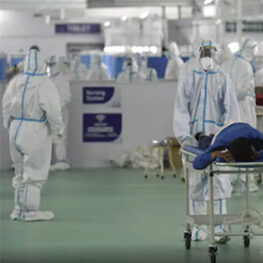 At a time when several states are witnessing surge in number of black and white fungus cases, a 45-year-old patient in Uttar Pradesh’s Ghaziabad was on Monday found infected with yellow fungus, which is said to be more dangerous than the other two fungal infections. The person is currently being

At a time when several states are witnessing surge in number of black and white fungus cases, a 45-year-old patient in Uttar Pradesh’s Ghaziabad was on Monday found infected with yellow fungus, which is said to be more dangerous than the other two fungal infections. The person is currently being treated at a city-based private hospital under ENT surgeon Dr Brij Pal Tyagi’s supervision.

Speaking on the same, Dr Tyagi said the patient is infected with all three kinds of funguses – black, white and yellow. “A 45-year-old patient’s sinus was normal in CT scan but after performing endoscopy we came to know that he contracted three types of fungi (black, white and yellow). Yellow fungus is generally found in reptiles. I found this first time in human,” he said.

It is believed that poor hygiene standards or consumption of unhygienic food causes yellow fungus infection. Excess use of steroids or anti-fungal medicines are also a possible reason behind sudden surge in such infections in Covid-19 patients, even if recovered.

WHAT ARE THE SYMPTOMS

Initially, the patient suffering from yellow fungus complains of extreme tiredness, low or no appetite at all which leads to weight loss. Subsequently, the weight of the patient starts decreasing rapidly and it becomes quite fatal. Reportedly, it later results into internal bleeding and multiple organs failure.

WHAT IS ITS TREATMENT

Anti-fungal drug Amphotericin-B is being considered as a primary treatment of yellow fungus. The same injection is being used currently to treat black or white fungus cases in the country.

IS YELLOW FUNGUS MORE DANGEROUS THAN BLACK OR WHITE FUNGUS

In case of black fungus or white fungus, the symptoms are facial swelling, blackening or discolouration over the nose, blurred or double vision, chest pain, breathing difficulties, coughing blood and severe headache. However, the doctors have reportedly said that the yellow fungus starts infecting the patient internally. Hence, the patients are advised to seek the medical treatment at the earliest once they experience symptoms such as body fatigue, low appetite and weight loss.

Meanwhile, Union Health Minister Dr Harsh Vardhan on Monday said that so far, 5,424 cases of mucormycosis have been reported in 18 states and Union Territories, news agency ANI reports. Several states and union territories in the country has declared black fungus as a notified disease under Epidemics Disease Act, stating that the infection is leading to prolonged morbidity and mortality among Covid-19 patients.

Both white and black fungus infections are caused by fungi moulds called ‘mucormycetes’ which are present in the environment.