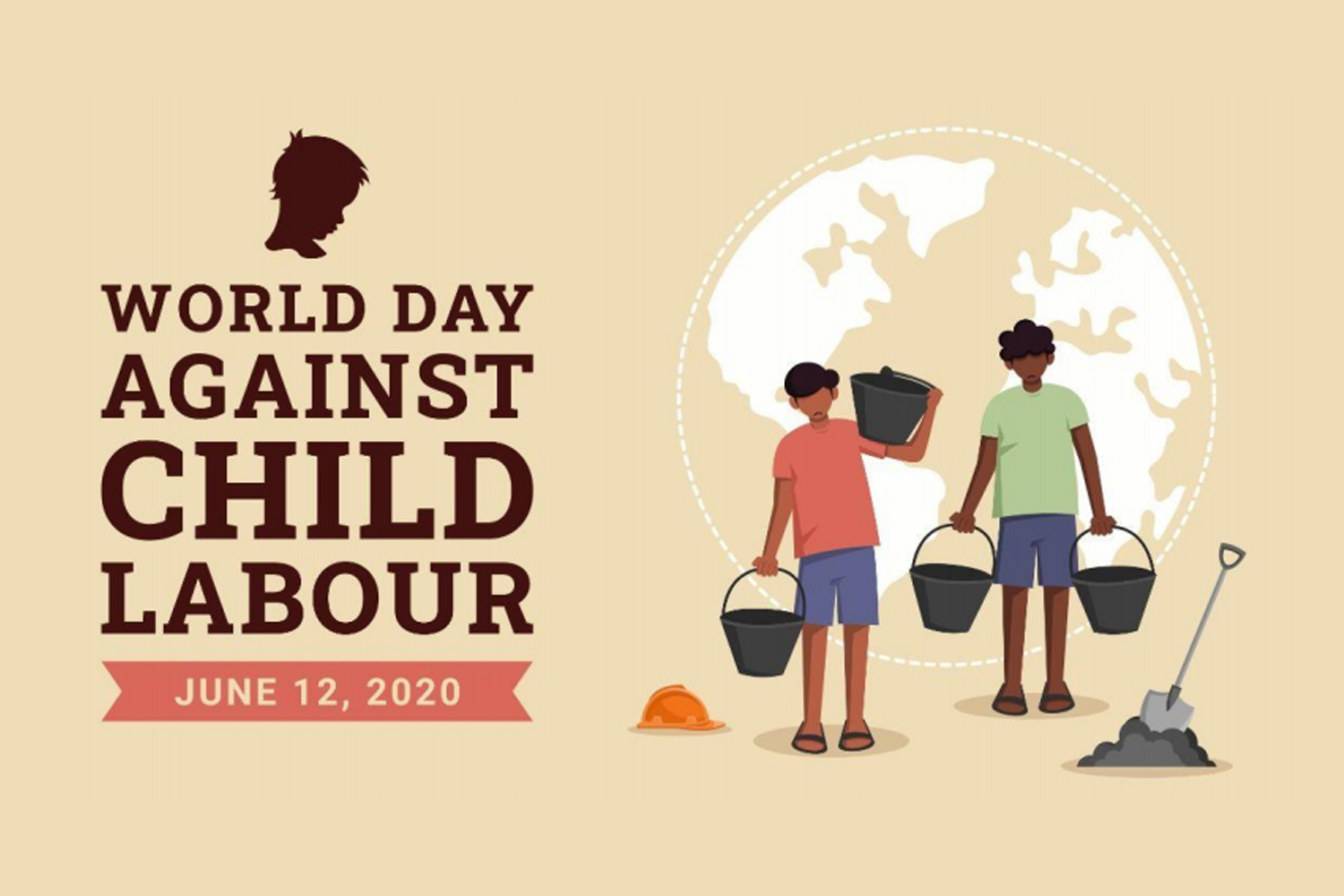 According to GENEVA (ILO News) – The United Nations General Assembly (UNGA) has unanimously adopted a
resolution declaring ‘2021 as the International Year for the Elimination of Child Labour’, and has asked the
International Labour Organization to take the lead in its implementation.
It also recognized the importance of “revitalized global partnerships to ensure the implementation of the
2030 Agenda for Sustainable Development, including the implementation of the goals and targets related
to the elimination of child labour.”

Human Race is at war against the deadly virus to save themselves from perishing, but, haven’t we overlooked the other demons of the society which is equally responsible to concede the advancement of Mankind…

This year’s World Day against Child Labour focuses on action taken for the 2021 International Year for the Elimination of Child Labour. It is the first World Day since the universal ratification of the ILO’s Convention No. 182 on the Worst Forms of Child Labour, and takes place at time when the COVID-19 crisis threatens to reverse years of progress in
tackling the problem.
In June for the World Day, the ILO and UNICEF will release new global estimates and trends on child labour (2016-2020), under the aegis of Alliance 8.7. The report will include an assessment of how the pace of progress towards ending child labour is likely to be affected by the COVID-19 pandemic and the unprecedented economic crisis that has accompanied it.

The world is concerned about the third wave of the pandemic which would be horrifying especially for children as expected by different medical experts. The medical agencies are working tirelessly to mitigate the situation.
However, there is another virus (metaphorically) which is equally horrifying for the children, that is ‘CHILD LABOUR’ and we must concentrate our attention towards it as well and find out ways and means to eradicate this deeply penetrated evil in our society.

For this year’s World Day, a “Week of Action” will be launched around 12 June, starting with the launch of the new global estimates on child labour. The events and activities carried out during this week will be an opportunity for partners to showcase progress in carrying out their “2021 Action Pledges.”

Children around the world are routinely engaged in paid and unpaid forms of work that are harmful to them. However, they are classified as child labourers when they are either too young to work, or are involved in hazardous activities that may compromise their physical, mental, social or educational development.

In the least developed countries, slightly more than one in four children (ages 5 to 17) are engaged in labour that is considered detrimental to their health and development.
The Africa, the Asia and the Pacific regions together account for almost nine out of every ten children in child labour worldwide. The remaining child labour population is divided among the Americas (11 million), Europe and Central Asia (6 million), and the Arab States (1 million). In terms of incidence, 5% of children are in child labour in the Americas, 4% in Europe and Central Asia, and 3% in the Arab States.

COVID-19 has plunged the world into a crisis of unprecedented scope and scale. Undoubtedly, restoring global health remains the first priority, but the strict measures required are resulting in massive economic and social shocks. As lockdown, quarantine, physical distancing and other isolation measures to suppress transmission continue, the global economy has plunged into a recession. The harmful effects of this pandemic will not be distributed equally. They are expected to be most damaging in the poorest countries and in the poorest neighbourhoods, and for those in already disadvantaged or vulnerable situations, such as children in child labour and victims of forced labour and human trafficking, particularly women and girls. These vulnerable groups are more affected by income shocks due to the lack of access to social protection, including health insurance and unemployment benefits. The ILO’s Flagship International Programme on the Elimination of Child Labour and Forced Labour (IPEC+) has ongoing operations in 62 countries, all of which are affected by the COVID19 pandemic. The programme has developed business continuity plans to mitigate the risks and to repurpose its strategy and is seeking to allocate additional funding to support efforts to monitor the impact of COVID-19 on child labour, forced labour and human trafficking, particularly in relation to school closures, business shut downs, unemployment, the loss of livelihoods in affected communities and a lack of social protection systems.
Experience from previous crisis situations, such as the 2014 Ebola epidemic, has shown that these factors play a particularly strong role in exacerbating the risk to child labour and forced labour. In line with the ILO’s policy framework to respond to the COVID-19 crisis, country policies responses and the ILO Monitor: COVID-19 and the world of work, this briefing note provides an initial framework for the response of IPEC+ to the crisis. Service provided by IPEC+ will be part of a holistic ILO response to mitigate the impact of COVID-19 and to rebuild better after the crisis.
Finally, 2021 will mark the UN International Year for the Elimination of Child Labour, which will be an ideal opportunity to reinvigorate efforts to achieve SDG Target 8.7 to end all forms of child labour by 2025.

The root causes of child labour and forced labour – including poverty, limited access to decent work opportunities for those of legal working age, social marginalization, discrimination, the lack of universal quality education, the prevalence of the informal economy and weak social dialogue – are likely to be exacerbated.

Nevertheless, considering all the hindrances and setback, substantial progress has been achieved in recent years, largely because of intense advocacy and national mobilization backed by legislative and practical action.
Between 2000 and 2016 alone, there was a 38 per cent decrease in child labour globally. “The struggle against child labour has gained extraordinary momentum over the past two decades,” said Beate Andrees, Chief of the ILO’s Fundamentals Principles and Rights at Work Branch. “Yet, 152 million children across the world are still in child labour. We obviously need to scale up action further, and the decision by the General Assembly to declare 2021 the International Year for the Elimination of Child Labour will be a great help in focusing attention on the millions of girls and boys still toiling in the fields, in the mines and in factories.”

How Can The World Community Get Firmly On Track Toward Eliminating Child Labour?

The International Labour Organization report ending child labour by 2025: A review of policies and programmes points the way with policy approaches and responses.