Victory Day Amidst Tension With The West: Russia Rolls Out Military Might 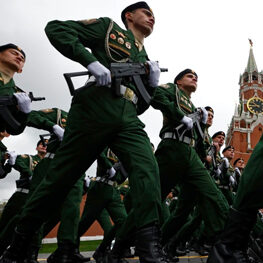 Russia showed off its military might with parades across the country on May 9 to commemorate the defeat of Nazi Germany in World War II.

Since coming to power two decades ago, Putin has sought either as president or prime minister to restore symbols of the Soviet and Russian past to boost patriotism.

Putin, during his address on the 76th anniversary of the Allied victory over Nazi Germany, vowed that Russia will defend its national interests and denounced what he asserted was the return of “Russophobia.”

“We will firmly defend our national interests to ensure the safety of our people,” Putin said.

This year’s parade comes as the ruling United Russia party faces parliamentary elections in September, with polls showing declining support for the pro-Kremlin party to 27 percent.

Russia’s relations with the West have also nosedived over everything from the fate of jailed opposition leader Aleksei Navalny to the conflict in Ukraine.

In recent weeks, the United States and Russia have expelled each other’s diplomats in a series of retaliatory moves, while Moscow and EU member states been involved in similar tit-for-tat diplomatic disputes.

The military parades come after Russia recently deployed more than 100,000 troops near the border with Ukraine and in annexed Crimea. The buildup prompted alarm in Western capitals over Moscow’s intentions amid an uptick in fighting between Ukrainian government forces and Russia-backed separatists in the country’s east.